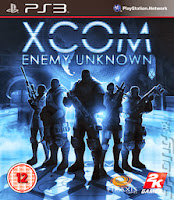 The Uber Ethereal is dead & Earth is saved but “MR T” sacrificed himself to let the rest of the squad escape & destroy the Temple Ship. The six KHANS were united for over 50 missions between them, each complimenting each other’s abilities & skills. Shooting, scouting, healing & by using psi-ops to destroy the alien invasion.

Great game & very satisfying when you manage to pull off an ‘overwatch’ strategy to take out a sectopod or a group of muton soldiers. It is tough and many times I would reload a save point to try a different approach. The main story is very brief in that you only three main missions you have to complete to finish the game but you will be given many random missions that give you the time needed to level up your characters & upgrade your facilities.

So another PS+ game chalked up to completion, that makes three now (Uncharted 3 & Specs Ops). £35 for a year’s sub is proving great value for money. I have started downloading this month’s offerings of Metal Gear Rising & Remember Me but they both will have to wait because the Bat will be arriving soon !!