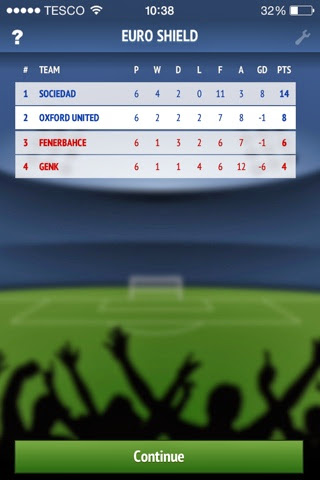 Euro Shield (UEFA league) was tough I managed to finished 2nd in the league to get through to the next round but lost that game 2-1.
I did manage to max out the 40K stadium for the game this generating lots of money.
I have spent so much time iOS gaming recently with Football Chairman, Disco Zoo, Pocket Mine, Carcassonne, Lost Cities etc
The iPad mini/iphone are just so easier to pick up and play for those minutes I have free. A season of football chairman takes approx 20 to 30 mins.
I'm regularly finishing in the top 10 now just need the find some high 95+ rated players to challenge for the title.
Posted by gospvg on March 31, 2014 No comments: 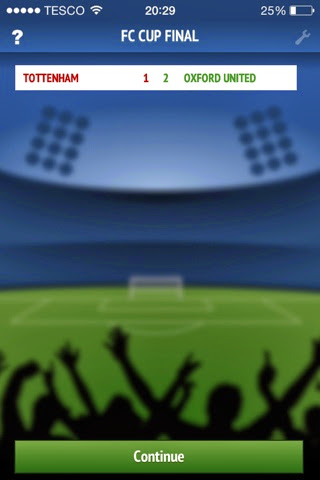 I've had me best season in the premier league finishing 7th & beating Spurs 2-1 in the FA Cup Final.
This also qualifies me for the Euro League next season. I've upgraded the stadium capacity now to 40K. I tend to set high ticket prices but will go for the average to see if I can max out the attendance.
Posted by gospvg on March 31, 2014 No comments:

With all the costs during a season like player wages, training facilities & the youth team. It is very difficult to ensure you end the season with a profit with the tax man taking his cut. 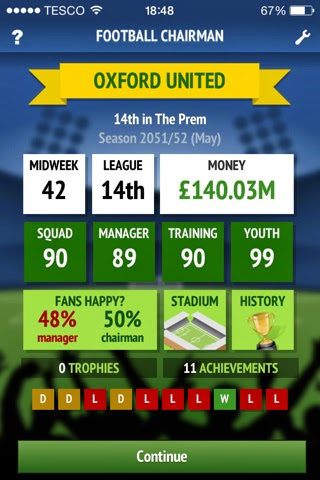 Finishing high up in the league, guarantees you end of season cash from the league, around £16 to £18 million. But when your weekly costs are around 650K even that is not enough to meet a season costs.
Match revenue is your main source of income. My stadium capacity is currently 35K which I can only really max out if I get a home quarter final cup tie. League matches, the attendance is effected by your current form & I average out around 18K. I've had to set the ticket prices high so I can generate the max revenue from the matches even though this annoys the fans. 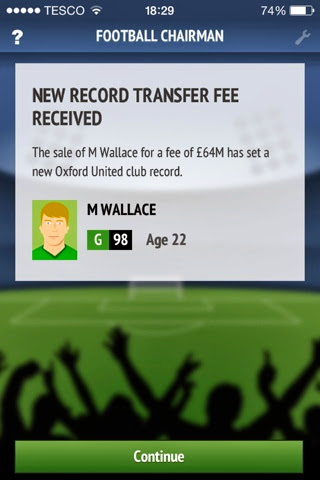 Occasionally you might get an offer for one of your players which is difficult to refuse. I sold a 98 rated keeper for 64 Million which also helped me save £72K off the wage bill.
It's a very tough balancing act to ensure you generate enough money each season to keep the best players, attract the sponsors & invest in the infrastructure.
Posted by gospvg on March 30, 2014 No comments:

V Burgess came through the youth squad to help take OUFC into the premier league. 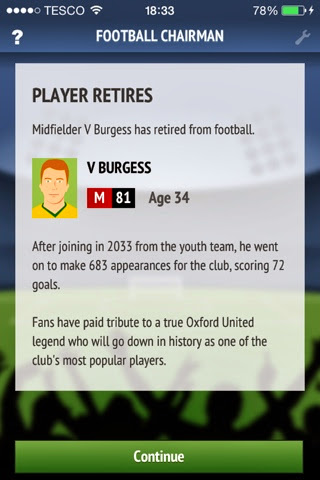 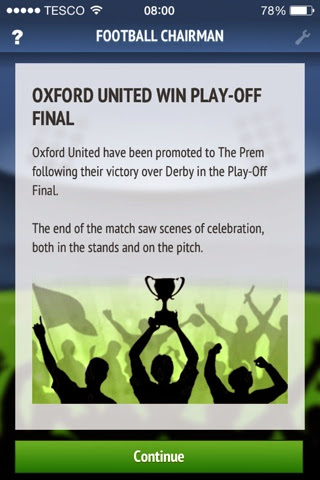 After losing a play off last season, I manage to win this season play off final to make it into the premier league.
Time to upgrade the stadium capacity & youth squad.
Posted by gospvg on March 29, 2014 No comments:

I have now taken Oxford from non-league football all the way up to the championship. I managed a great cup run this season with the highlight beating Man Utd at the Theatre of Nightmares :) 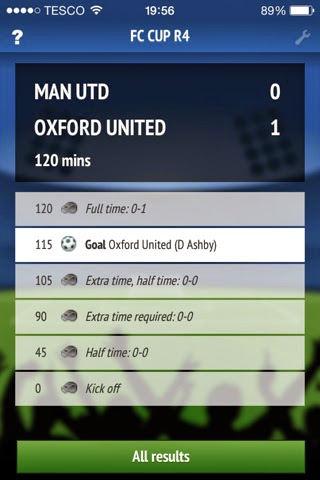 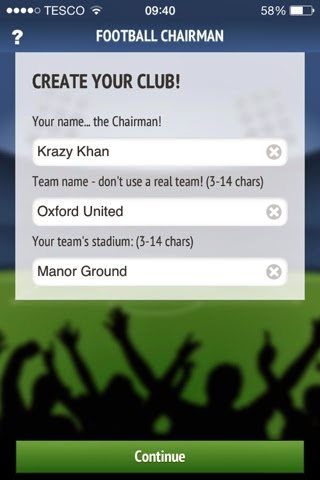 Addicted to yet another football game but this you play the role of the Chairman. Hiring, Sacking Managers, setting prices & improving the stadium, squad or youth team.

I returned Oxford United to the Manor Ground to start off my reign as chairman. Invested in the training & youth team. Finally achieving promotion after three season in Non League C division. 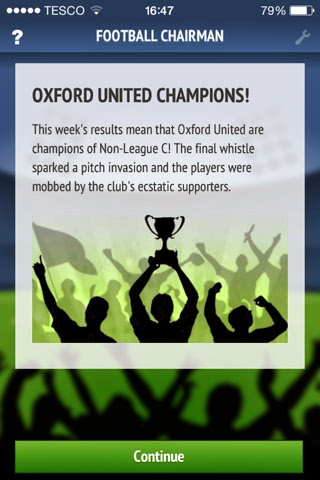 This is a tough game in that you need to ensure you manage your wage bill whilst juggling to keep the fans & manager happy.

Thankfully compared to Champ Man this game is easier on the battery life.

My highest score so far is 108 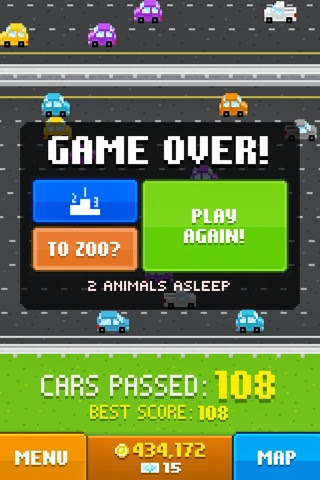 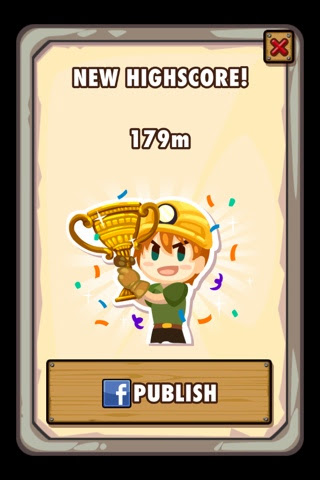 Pocket mine has been updated now with different levels to play, the acid level requires two batteries to start & also use up double the amout of pick smashes to break a block. You also get double the XP. New depth score to start me off straight at the top of the leaderboards.
Posted by gospvg on March 18, 2014 No comments: 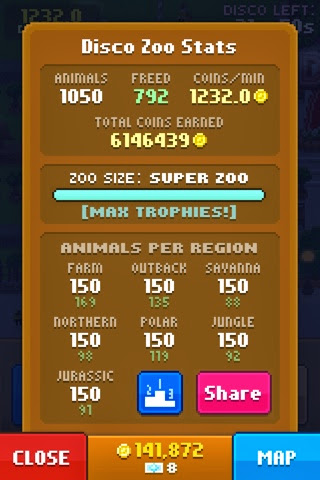 Collected all the animals & now have a super zoo. Not much else to do now except collect money & wait for future updates to unlock new levels.
Posted by gospvg on March 18, 2014 No comments:

Over the weekend I played quite a bit of Deus Ex & got into my first boss fight. I have not unlocked the typhoon ability so had to rely on guns & grenades. It took me a few attempts to figure out a strategy but I finally managed to take him down by using EMP grenades to knock him out & continue shooting.  I used the pillars for cover to avoid being attacked.

Really enjoying the game especially sneaking around quietly & taking out enemies with my silenced rifle.

I've finished the first area & have just arrived Hengsha, my first reaction was holy crap !! look at the size of that map !! My first stop was the Limb Clinic to purchase another two piraxis points to unlock the Typhoon upgrade.

Disco Zoo - You built a time machine out of a delorean?! 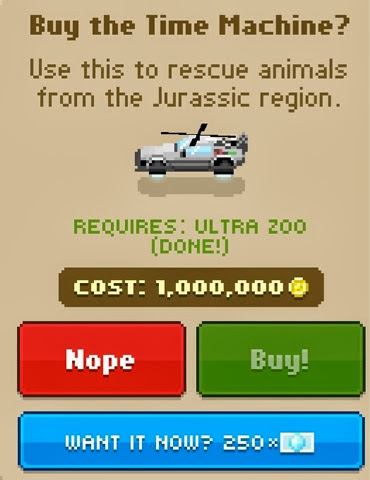 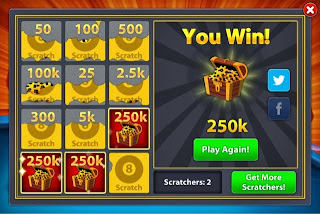 Not that you can spend it on much apart from from buy more cues ?! 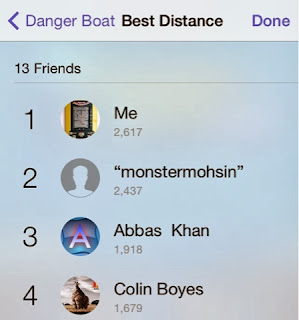 Finally thanks to the aircraft carrier I have managed to beat Monsters total distance & set a best distance of 2,617.

Even with the PS4 purchased this year was always going to be me playing catchup with 360 games I have not played.

Having recently completed Mass Effect 2 I thought I will leave the third game for a while (I should add that at some point I need to go and finish off Dishonored).

I've never played the previous games so this was my first in the series & so far I am very impressed with the gameplay & sci-fi elements of the storyline. I had to do the first mission again because I did not save the hostages.

I've got 2 praxis points to spend on augmentations, I'm thinking to either go with Radar upgrade & take-down or the hacking capture skill.
Posted by Krazy Khan on March 10, 2014 No comments: 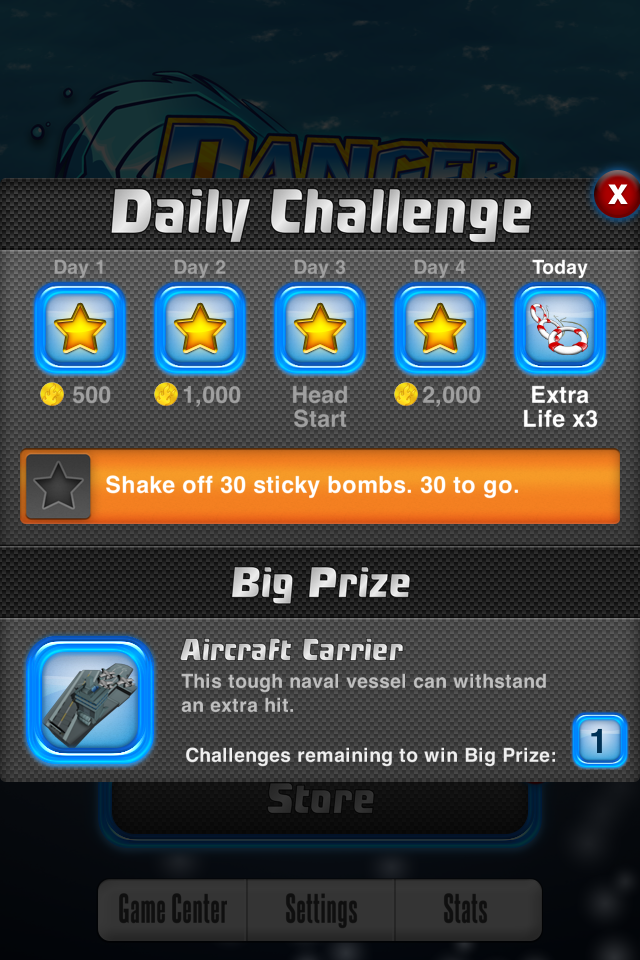 Completed the daily challenge to finally unlock the Aircraft carrier which lets the naval vessel take an extra hit.

I also now have a x9 multiplier so time to go and get back the best distance title from the MONSTER !!

Time for the danger boat to retire & the aircraft carrier to break records. 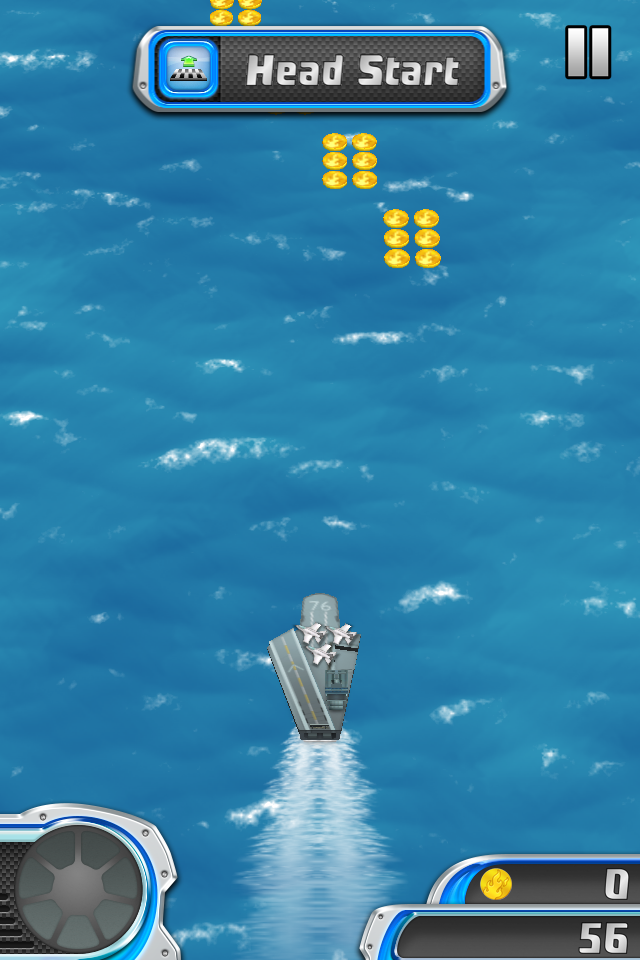 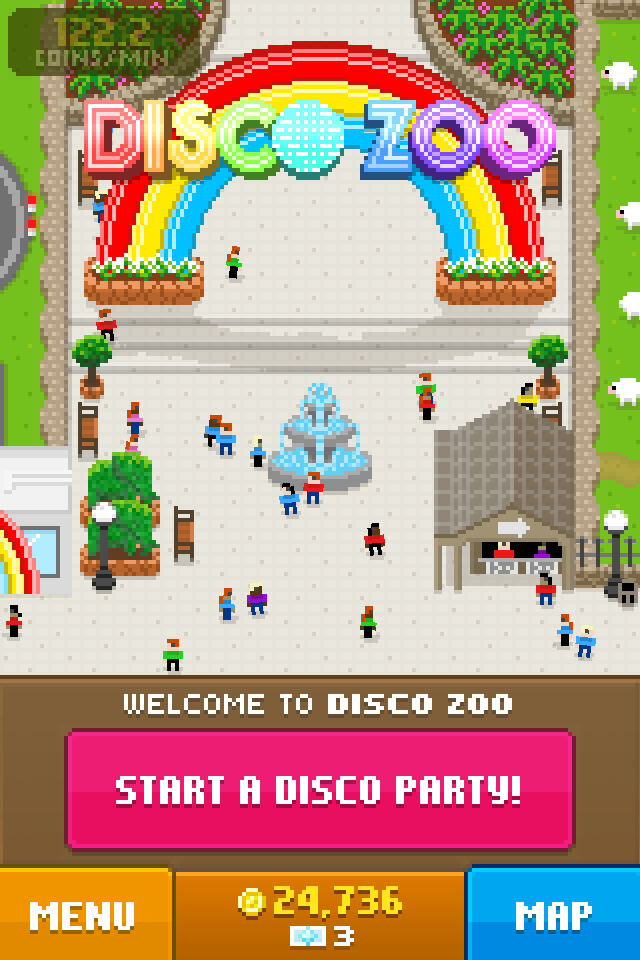 My latest iOS time waster is Disco Zoo brought to you by Nimblebit, the same developers that made Tiny Tower (KABOOM!).

In this game you have to use the helipad to visit areas and play a mini game to collect animals for your zoo.

These animals then generate income for you so you can visit the helipad again & constant loop. You get the idea now...

You can use Disco bux to start a disco & your income will double for a certain time. Occasionally you will be given tasks to find strayed animals across your zoo or given the opportunity to sell an animal for more cash.
Posted by Krazy Khan on March 06, 2014 No comments: 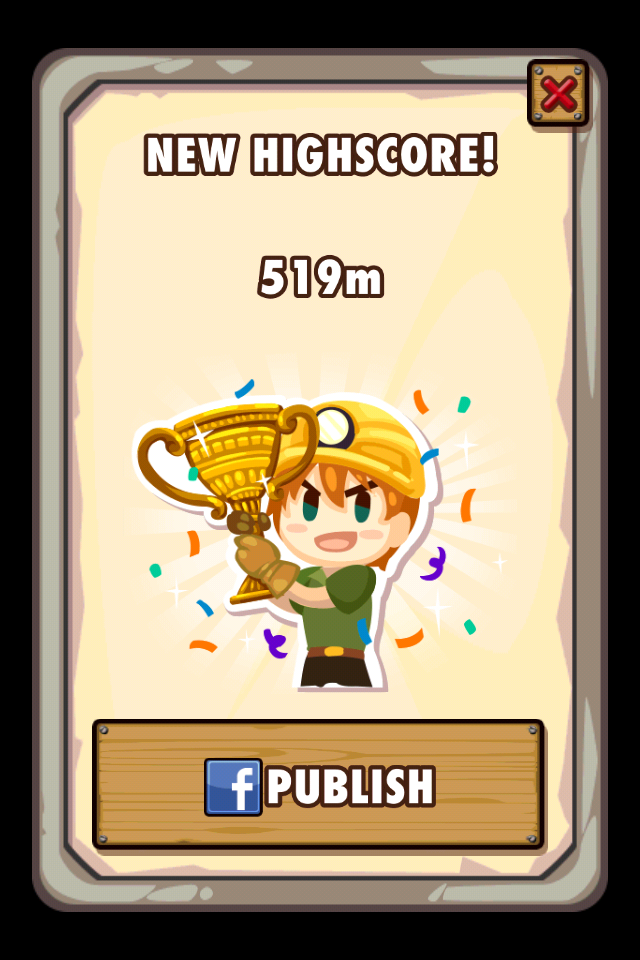 Still playing on the odd occasion, manage to set a new high score of 519M again with healing cards & explosions.

A new update has added a few new areas you can visit like Acid Caves, Space Trip (for which you need to create a ticket in the factory) & Lucky Hit (Which so far for me has not prove lucky).
Posted by Krazy Khan on March 05, 2014 No comments:

After completing the sorrowing meadows and defeating the demon it was time to head to the Mountains & find the moonblood village.

There I met an elder who explained I was created by the moonbloods from the souls of two people. Jin (Ginger's brother) & an assassin called Cassius. General Gaius knew of the village and was planning an attack so it was time for the final showdown.

You have to fight quite a few soldiers in this volcanic region before you come face to face with General Gaius, it is quite a tough boss fight because it has quite a few stages. I had to use up nearly all of my healing items to ensure I would not die.

Unfortunately it is  not only General Gaius who meets his end has Dust perishes in the lava. An enjoyable metroidvania type of game with great voice acting for the main characters.

Next on the list to complete Army of Two Devils Cartel.
Posted by Krazy Khan on March 04, 2014 No comments: