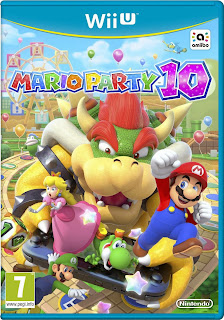 Sunday afternoon was family gaming, so time to dust off the WiiU & play Mario Party 10.

Mario Party 10 makes a change from the previous games in that the players work as a team instead of individuals to reach the  goal.

I've enjoyed playing the Bowser Mode where I was Bowser using the gamepad to chase down the other players via mini-games I tried to destroy hearts they own to eliminate them from the game & reaching the end goal.

We tried out the three maps which is a bit limited considering I remember previous games having 6+ maps but overall It's another good family Nintendo release.

Email ThisBlogThis!Share to TwitterShare to FacebookShare to Pinterest
Labels: Mario, Wii U