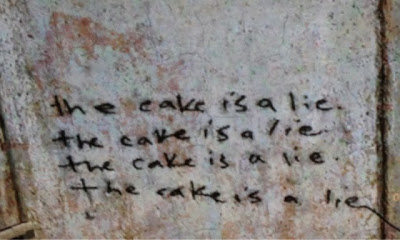 Finally managed to get pass the annoying platform section of level 18. Level 19 was a walk in the park compared to 18.

You get an easy boss fight sequence against Glados before you see the outside world & the end credits.

I'd still say that it is an overrated game with all the plaudits it gets I've played far better games over the last couple of years (see my top list).

On release yes it must have been something special due to it's unique gameplay style with the portals & a twist at the end but several years later I think those that have played it need to take off their rose-tinted glasses.

My fault for not playing it on release, so I am going to try with the PS4/WiiU to play the games I want during the year they have been released.

I was going to start Infamous Second Son but the WiiU will arrive next week & I won't complete in time so I'll take a look at the smaller arcade titles I have on 360/PS3 to find a shorter game. The Fallout DLC will take me longer because I will take my time and wonder around everywhere. I've still got lots of XBLA titles & PS+ freebies that I have not played.