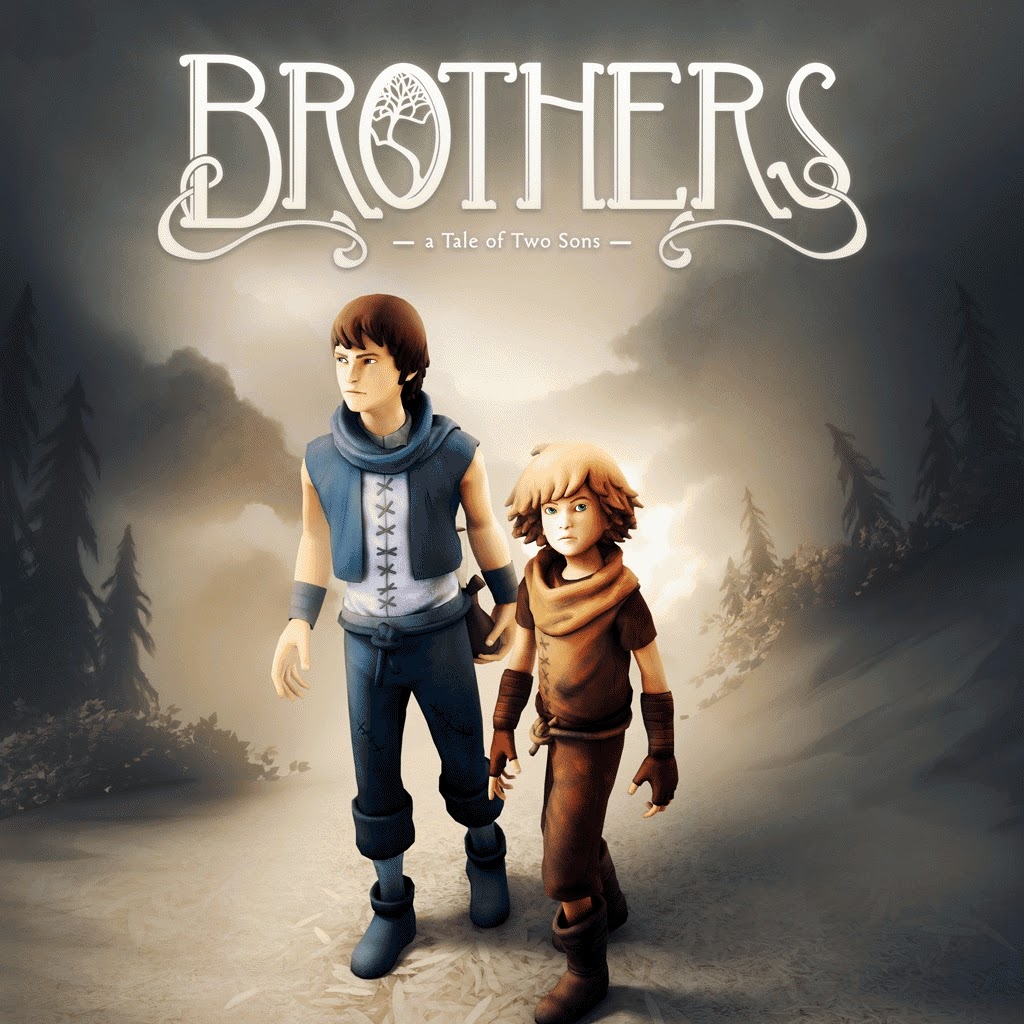 
DO NOT CONTINUE READING FURTHER BECAUSE I WILL DISCUSS SPOILERS ABOUT THE GAME.

PS+ is such a good deal that I am baffled with the games Sony give away. Brothers A Tale of Two Sons was on quite a few Games of the Year 2013 lists so it was on my list to purchase at some point but luckily was given away in March with PS+.

The game starts off with a sad opening showing the brothers mother drowning & the younger brother struggling to save her. Back to the present day, their father falls ill & you have to take him to the village doctor. This sequence introduces you to the unique control method, where you control both characters.
The older brother using the left thumbstick & the younger the right thumbstick. It takes a while to get familiar with the control, I found it easier having the older brother in front & the younger running behind.

The Doctor tasks you with finding a cure for your father's illness & thus begins the game. You will journey through many obstacles, see strange lands & creatures, enjoy the simple puzzles & fun sequences like the gliding plane.

One of these sequences has you saving a damsel in distress & you follow her away from danger in the hope she is leading you to the cure for your father but she transform into a spider and during the boss fight the older brother is wounded.

Upon reaching the tree of life you rest your wounded brother up against a log & rush up to retrieve some healing water. What follows is easily the most emotional sequence I have seen in a video game since Aeris dying in Final Fantasy 7.

You return to find your brother dead, you try to give him the water but nothing happens. A Flashback shows you hugging your older brother before the camera pans down to show the dead body. The game then shows you digging a grave & you have to drag your brothers body to the grave. Then bury it with four piles of earth, you will always remember how many piles of earth because this moment will stick with you forever.

You return to the village with the help of the griffin. Upon reaching the shoreline you realise you can't cross the water. The younger brother has always been scared of the water because of his mother drowning & it was only with the help of his older brother was he able to swim.

I ran around the shoreline thinking there must be another way to get across? The mothers spirit appears to comfort the younger brother, damm this game is tugging at my heart strings !!

I then pressed up on the left analogue stick & the younger brother swam across, using the strength of his older brother memories he made it across & gave the cure to the doctor.

The final sequence shows the father breaking down in tears in front of the tombstones of his wife & son but the younger brother stares into the distance.

So much emotion, I spent ages thinking & reading up about the game afterwards. The older brother dying? The younger brother summoning the courage to swim? The damsel in distress?