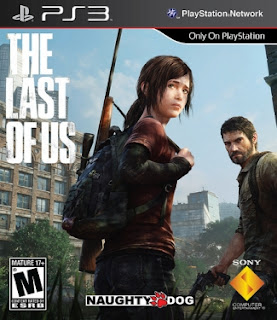 Thanks to this game I can now fully appreciate the benefits of digital media. If like me you have purchased the retail physical media version make yourself a cup of tea/coffee or in my case nothing because I'm fasting. It is that long that it takes me back to my Acorn Electron days & tape loading.

Anyhow the game, yes it has zombies, infected or whatever you want to call them. Wait !! don't leave just yet !!

Like most gamers I am also sick to death of zombie games although I am disappointed that Nintendo have not delved into the theme, Super Mario Zombie !!

The Last of Us is made by Naughty Dog, the team that made the Uncharted series so if not anything else you can almost guarantee that it is going to have a hollywood-esqe story, voice-acting & a great musical score.

Just by playing the opening sequence you are not disappointed by the work Naughty Dog have put into the game. It provides the backdrop for Joel & shows you the beginning of the outbreak. Then fast forward 20 years & quarantine zones have now been set up. A military style regimented system is in full flow. Controlling the human population & rationing the consumption of resources. Yes this game has also ticked the box by having an anti-government group called the "Fireflies". The leader of the "Fireflies" asks Joel & Tess to deliver a package, the package is "Ellie" a 14 year old girl who is immune to the infection.

Ammo is very scarce in the game so you really need to focus on using your melee skills, ideally by stealth. You can collect resources during the game & craft items like healing kits, shivs & my favourite molotovs. I have left the quarantine zone & ventured outside. This is when you start to encounter the infected, in most zombie games they would not be a problem because you will have stacks of ammo but in this game you need to play slowly & carefully by using stealth to your advantage to either avoid contact or preform a melee takedown.

Similar to Uncharted after you have cleared an area of enemies you are free to wonder around & collect items. I strongly suggest you do this because you can always find healing items, more ammo or materials for crafting hidden away in a locked room or desk drawer.

It has been a promising first few hours of play-time & I'm looking (not) forward to loading up the game again.

Email ThisBlogThis!Share to TwitterShare to FacebookShare to Pinterest
Labels: Last of Us, Playstation 3