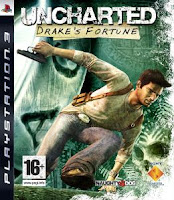 Lastly getting lost at certain locations & knowing which way to go, these usually come after the gunfight sequences. You then find yourself wondering around jumping & trying to grab ledges or jump onto platforms only to fail & fall to your death. Why? Because not all ledges & platforms in the game can be interacted with !! There is only one set path & after trial and error you will eventually find Drake jumping a larger gap than you thought possible where previously you would have died trying to jump a smaller gap.

The game was released in 2007 but why should that be an excuse for some obvious failings I can see in the game play? Much older games have not had these issues (Metal Gear Solid, Tomb Raider & of course also released in 2007 Assassin Creed)

Putting my frustrations to one side I am still enjoying the voice acting & storyline. Adventure awaits (albeit slightly frustrating)
Posted by gospvg on June 04, 2012