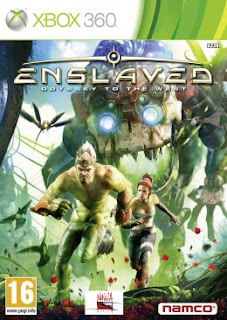 It was like visiting friends who you have not seen in years & then realising your mistake & asking yourself why did you drift apart?

Batman Arkham City, Rage & Skyrim have kept me away from Enslaved until today, I initially loaded up Skyrim to play & then thought no let's have a break & go back to Enslaved.

This game really is lovely to look at; visually beautiful, the soundtrack & voice acting accompany the story nicely. Having been away for so long it took me a while to remember what some of the buttons done, activate shield (RT), aim staff (LT) & charge attack (hold down x).

I continued from Chapter 7 in the game and Trip has arrived home to find that the slavers have attacked & destroyed her town. She is searching for any survivors & goes off ahead.

It took me most of this chapter to remember how to perform the various combat moves from take-downs to charged attacks. The game only allows you to use certain actions when it deems fit like crouching & using the cloud. I collected quite a few orbs and when I caught up with trip used them to upgrade my health & staff. There are masks in the game you collect which give you some sort of flashback but I don't think I have collected them all in the previous levels.

Chapter 8 was all about powering up a windmill & overloading it with power to cause the electrical circuits to trip out. This would allow access to the war room which might have some survivors. The windmill puzzle had three blades & opening the first was easy but the second had me stumped for a while before I figured out that only a particular blade will stop on the platform. Once they were all activated the circuits overloaded and you get to fight some mechs, there is red mech who pummels you if he gets hold of you but by using the charge attack you can stagger him to then let leash some attacks.

This chapter has a boss fight with the dog like enemy that charges around, you fight him in a previous chapter I forget which? I could not remember what I had done before so tried to just attack him but that did not work, then I tried a stun attack with my staff & that gave me some time to attack him before he got back up again. So using this method after a while I destroyed the dog like mech.

The cut scene at the end of chapter 8 was Trip going into the war room and hearing a recording of her fathers voice who laid dead on a chair, there was a close up scene of Trip's face but no tears were flowing. The voice acting was spot on but I think a few tears would have completed the scene.

Alas a couple of chapters was all I had time for but this is one old friend that I will make sure I do not drift apart from for a long time again. See you soon...
Posted by gospvg on January 15, 2012