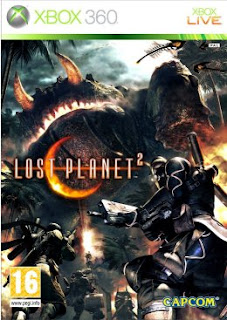 After finishing off Borderlands, it was decided that Lost Planet 2 will be our next Monday PMG game. With 6 interested players from UGVM we split up into two groups of three. So the 'Playerz' Gus, Ste & Cooltag went on their own adventure whilst I teamed up with Sessile & Toby to form the 'Noobz' group.

The game starts you off with some FMV and then I was on-board a helicopter shooting at a swarm of flying enemies but where were Sessille & Toby? They were somewhere else? What? After killing the swarms of bees or whatever they were a giant version arrives to attack the helicopter so time to take him down. There is no auto targeting in the game (it may be an option  but I have yet to find it) so it is my usual style of shoot & pray which eventually worked.

The helicopter then drops me off to reunite with my party members to tackle a giant snow beast called a Chryatis. This was just the Prologue to the game & we realised that there are two parts to this when playing in a party of more than 2 players, Players 1 + 3 will play Prologue-A & Players 3 & 4 will play Prologue-B.

After defeating the Chryatis we are given our first mission to deactivate some mining facility. Making our way through dense jungle I die after getting ambushed by enemies. Along the way you need to collect the orange orbs that are left behind by enemies to take up your T-Eng meter, you can use this meter to heal yourself by pressing the start button & also for healing other party members.

Arriving at the mining facility you are given a mission of activating 5 generators but there are friggin snipers who kill you with one shot which knock 500 points of your battle gauge, once this gauge reaches zero it is game over for your team. You all share the gauge so starting with 2500 points only gives the team 5 re-spawns for all players. Apparently you can increase this gauge by collecting data points & completing missions but we did not notice this increase when activating data points?

After activating the 5 generators you then have a timer 1 minute 30 seconds to turn on 4 control units, these units must all be on for the time to reduce. The enemies that come to attack you obviously want to disable these control units. This section was the most frustrating because the enemies had turrets & mechs to attack with, we died on quite a few occasions at this point & annoyingly the restart checkpoint was at the start of the mission meaning we had to do the first section again before we could try to attempt the tough second part.

We were playing on normal difficulty & even contemplated changing to easy, Toby had to go for the evening but not before one last attempt at the second section proving successful with me staying and guarding one control unit & taking out the spawning enemies near this unit. Sessile running around and activating all the remaining control units & Toby killing any enemies that would come into his line of fire. Luckily I had a gattling gun spawn near me to take care of any mechs that would appear & Sessile managed to find a back path to destroy the two turrets. With the clock ticking down we managed to complete the section & the mission.

The storyline if there is one is very confusing with a mash up of FMV scenes (some very long) & dialogue not really explaining what is going on & how to control your character. But trial and error in the end prevailed for us to complete the first chapter of Episode 1.
Posted by gospvg on October 11, 2011