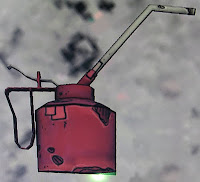 The Lubricator, Bobble-Trap & What a party! achievements are 3 of the most annoying in the Borderlands game mainly because they hardly ever drop for you to collect.

Obviously you can only get these by killing claptraps.

There are 3 locations where you have a chance of getting these drops.

1. Dividing Faults, you need to go to the Hyperion Claptrap factory, this is a good location because there is a huge number of claptraps for you to kill.

2. Hyperion Dump, make your way to the small fort & claptraps will spawn from the nearby pipes.

3. Farming MiNAC - This is the best location because it requires you to do very little. After the MiNAC intro run to the top right corner of the map & you will find a small shack. Just hide yourself in this shack & let the MiNAC spawn exploding claptraps. When they explode they will drop loot.

I used a wired controller for this because the wireless controller goes into sleep mode if not used. Camped myself in this shack for a few hours whilst I watched some missed episodes of Torchwood. Came back 4 hours later to kill off the MiNAC & collect the ridiculous number of loot that had been dropped.

Not the best method I admit for enjoyment & power consumption but I blame gearbox for having these lazy achievements in the game & my OCD for completing the game.
Posted by gospvg on September 12, 2011