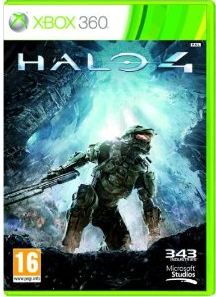 Another adventure with Master Chief, flying pelicans, riding mechs & driving tanks. All to save earth & cortana. There is a lot more story & emotion in this game compared to the previous three. The game shows you more of the character of Master Chief & the relationship with his AI, Cortana. I won't go any more into the details or spoil the story.

343 studios have done a very good job taking over Bungie, it remains to be seen if Master Chief will become a yearly mascot or other games will be released in the halo universe.

I thoroughly enjoyed the flying level, it's Star Wars inspired ducking & diving around the obstacles. They could make a game just on that alone or to please me how about a game with the mech. I still think the mech is weak but we were playing on legendary difficulty so I am going to do something that I've not done in a long time. Play the game again !!

This time on normal difficulty, exploring all the maps to find the collectibles & enjoying the vehicles in the game.

Abbas will confirm I get very attached to my vehicles especially the tank, mech or pelican. Thus when they are taking out by a wraith I would rage & charge in to kill the wraith with grenades.

It's not master chief but the vehicles that make the halo universe so enjoyable to play. Master chief just gives you a character to follow his adventures.

We know this is the start of a new trilogy so I'm looking forward to the next adventure with Master Chief .... & Cortana.
Posted by gospvg on January 20, 2013 1 comment: 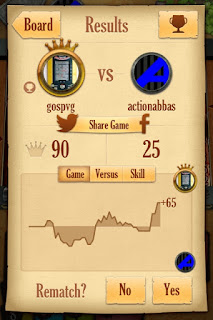 I have played quite a few games against Abbas he is currently in the lead winning 13 to 12 but I did just get my highest score in a recent win. 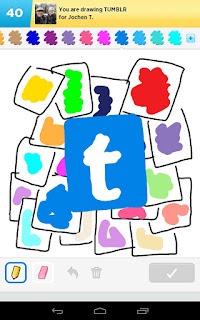 The kids are always on the ipad so I never get a chance to play my turn on Draw Something. I tried t on the iphone but the screen is way too small so I purchased again on the the Android store & installed on the Nexus 7.

My first drawing on the nexus 7 Tumblr
Posted by gospvg on January 14, 2013 No comments:

Email ThisBlogThis!Share to TwitterShare to FacebookShare to Pinterest
Labels: Android, Draw Something 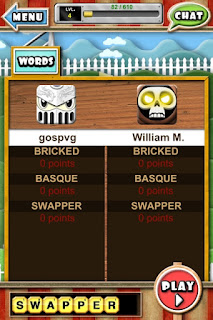 Three word wipeouts in a row !!
Will this race ever start?
Posted by gospvg on January 13, 2013 No comments: 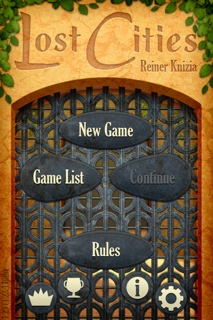 Lost Cities is another board game to mobile conversion. This is developed by the Coding Monkeys, the same team that gave us Carcassonne.

It's a simple game in that you have to place card starting from the lowest number to the highest to get points. Each set you start gives you a -20 starting score which decreases when each card is played.

There is a really good tutorial in the game which will help you understand the basics.

I have played quite a few games against Abbas with the winning move coming on the last card. 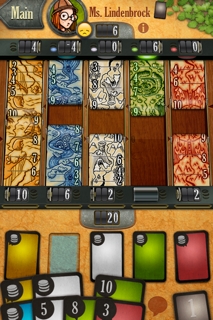 When you start a new colour you have the option of playing a coin card. This doubles your starting to -40 but rewards you with double point for any cards played.

If you are feeling brave or foolish you can even start with a double coin card score of -60.

Whilst defending UNSC Infinity from attack you get to control a mech !!

The control works well but it just does not seem satisfying enough to me. It needed long range missiles instead of grenades. The design needed to be more beefier like the mechs in Lost Planet.

In a previous level you get to control the tank, now this is still the vehicle for me in Halo. Slow, yes but very very powerful.

Looking forward to seeing what other surprises Halo 4 shows up.
Posted by gospvg on January 13, 2013 No comments:

Another game that has ben in Limbo for a long time, after completing the main quest, I've tried a few times to try & rekindle the love by completing various side quests but nope the honeymoon is over. I'm done with Skyrim.

After 120 hours of adventuring it was time for Valdarr to return home to Whiterun & spend the rest of his days with Lydia.
Posted by gospvg on January 13, 2013 5 comments: 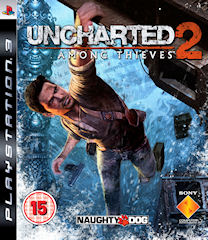 After a couple of evenings I have finished Uncharted 2. It's been in limbo for a long time but I wanted a break from XCOM. So off to shamballa I went in search of the tree of life.

After taking out a tank & fighting hordes of men with machines guns I finally completed the game.

These games are really well presented but they still have hat Call of Duty feel about them. Big action sequences followed by some puzzle & wondering around then cue the next sequence.

I do have the 3rd game somewhere still to play, button press at the ready !!
Posted by gospvg on January 12, 2013 No comments: 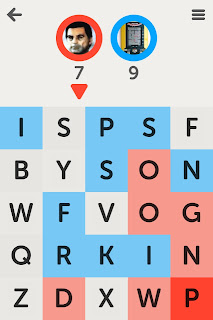 Another word making game on the iOS but this time a slight difference in that you have a grid of 25 letters upon which you have to make words, when you do they change to your colour.

You keep on making words until all the letters on the board have a colour (red or blue).

You can lock a letter down to your colour by surrounding it with your own colour. (See Jochta's red P in the corner). The other player can still use this letter but it will not change colour until the surrounding letters are changed. 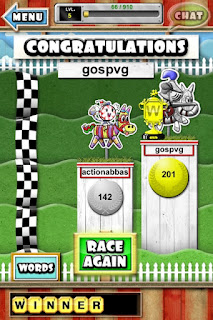 A variation on the word making game, this time you are in a horse race & the words you make will make your horse race to the 200m finishing line.

You can only use certain letters to make your word & the usual bonus tiles of a DW (Double Word), TL (Triple Letter) etc  are all in the game.

There are also extra powerups you can use during the game only once per skill. Boost, Bomb (This will destroy the starting letter, letting you create any word) & my least favourite catchup. This powerup will let the losing rider catchup to the rider in the lead. Annoying power-up especially for the person in the lead who has built up a margin only to have it taken away.

My suggestion would be to replace this power-up with "Gallop" which will let you create two words in one turn.

Apart from the catchup power-up, it is an enjoyable game & can be played with up to 4 players.

Send me an invite if you fancy a game.
Posted by gospvg on January 12, 2013 No comments:

Only one of those games was released in 2012 (AC3) & that was ok at best but not exceptional. The AC games were more of the same, Uncharted I found frustrating but was impressed with the Hollywood style action. Gears of War 3 again was just more of the same on a bigger scale. Enslaved I did enjoy very much, it does not offer anything new to the mature gamer but what it does offer is a nice action adventure game done right.

I have been trying to go through and complete some of my many XBLA purchases during the year managing only three but it is one of these games that I enjoyed spending a Sunday afternoon tackling. Limbo with its blend of action & puzzle kept me enthralled for a few hours & even had me asking questions after I completed the game.

I am hoping to spend less time watching TV shows (which would have been easier to choose a winner “Game of Thrones”) & Movies this year which should hopefully give me approx. 10 hours a week for gaming.

I am really going to try and spend as little as possible this year on gaming, I will not be buying any of the new consoles on release & have no desire for a Wii U. With my iOS stack of games, back catalogue of 360/PS3 games & steam pile of shame I think I am spoilt for choice. I finished off 2012 spending a lot of time playing XCom, it is a shame I did not purchase this on release because this would have easily been my game of the year.

With my back catalogue gleaming with Red Dead Redemption, Mass Effect Trilogy, Bioshoscks, Deus Ex, Uncharted 3, Fez, Journey, Mark of the Ninja & many many more I think 2013 is going to be an amazing year for gaming.

Email ThisBlogThis!Share to TwitterShare to FacebookShare to Pinterest
Labels: Game of the Year, Limbo 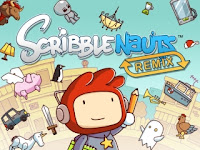 First day of the new year & I am adamant to play some proper games on the iOS platform this year no silly time management games or endless runners.


I did think about going through my steam pile of shame but that would take time away from playing the consoles so I am going to trawl through the endless iOS purchases over the past few years to find something enjoyable to play.


50 levels of Scribblenauts had me making everything from dinosaurs, cars & zombies. Each level sets you a challenge & you need to use the crayon to type what you want to create in the world. You can almost create anything, the levels can be completed in many ways & by using different objects.

It's quite a quick game with only the last two worlds proving a challenge, easily finished in a few hours. There are some extra content which can be purchased via in-app but I'll leave my character riding his mech. 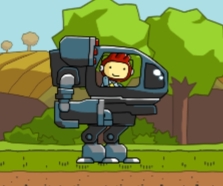 Next, one of the first iOS games I purchased Rolando but have never played.