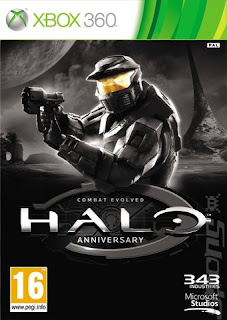 Anniversary? Where's the party? I was not invited !! Oh! you have given me the re-release of the first game with a lick of paint? Is that it?

Third time lucky I guess, it has local co-op & playing on legendary difficulty provides a difficulty spike. The lick of paint makes the environment look nice & you can go back to the old school graphics by pressing the back button if you want but I'm a graphics whore so will stick with the new look.

We completed The Pillar of Autumn & are part way through the Halo level before life intervened to force us to switch the game off. It's been a while since I have played a local co-op game with Abbas (Splinter Cell Conviction) & his game style has not changed, charging off into the distance whilst I take my time to look at the surroundings & take out enemies with my sniper rifle.