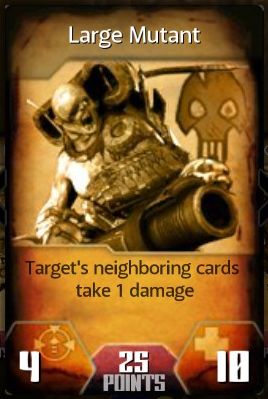 There are two achievements in the game one for collecting all 54 collector cards in one play-through "Gotta Have 'Em All" & "Obsessive Compulsive" which is 100% completion in the campaign. To do this you need to get first in all races, complete sidequests, mini-games, vehicle jumps, schematics, job board missions & obviously collecting all the cards. You can check your progress by looking at your stats screen in the game.

You should have 94/130 when leaving the town of Wellspring

ID (The developers) decided to make some of these collector cards miss-able in that if you do not collect them on your first visit to a location then TOUGH LUCK !!

I missed the Large Mutant card on my first visit to Dead City, when I went back to get the card I was locked out by a door that would not let me return to the wasteland.