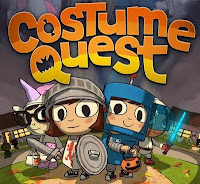 Even though I have completed the main quest, I still have a few things to do in Assassins Creed Brotherhood thus the completed post on that is on hold for now.

Costume Quest was 1200 points on release but I purchased for 600 points in a recent sale. Is there any reason to buy an xbox live arcade game on release? Anyhow that is a different topic.

Costume Quest has you playing the role of Reynold (or Wren if you want) & it is Halloween. So you set off for some trick or treating but Wren is kidnapped by monsters who mistake her for candy. Now begins your quest to get your sister back. It is a simple RPG turn-based game & the costumes you wear determine which attacks you can perform.

It is a very short game approx 6 hours but enjoyable in it's simplicity & cartoon style graphics. You are given various quests to complete form finding materials for new costumes to trick & treating a set number of buildings.

The various costumes including Robot, Knight to Unicorn all offer different abilities whilst in battle from healing, stunning & performing a power attack help you along the way in various quest. I mostly played the game using the Robot, Knight (later Ninja) & Statue of Liberty costumes with battle stamps for counter attack & auto-healing.

There is a level cap of 10 which make the last boss fights slightly tougher because they are level 20 but by carefully choosing which costumes & battle stamps to use it is easily completed.

A DLC pack has been released which gives an extra few hours of gaming for 400 points but I will not be buying that because I prefer to spend those 400 points on a game instead. If the DLC content is ever on sale though & reduced to 200 points I may consider it.

Now back to AC Brotherhood to finish off the remaining side-quests & try and get some of the multi-player achievements.
Posted by gospvg on May 02, 2011