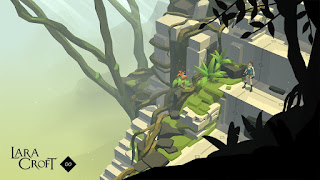 Now that I have an iPad of my own that the kids cannot nick I have gone back to playing some games on it.

Lara Croft Go was my first choice, it's a turn by turn based puzzle game that has you obviously searching for treasure whilst avoiding pitfalls & either escaping or killing creatures like snakes/lizards.

I only managed to get stuck on one level for a while until I figured it out but the majority are pretty straight forward & fairly simple. There is also a Hitman Game which use's a similar play-style which I have not yet played. There is a new Monument Valley style game called Dream Machine which I will start next but for now back to Batman.
Posted by Krazy Khan on April 19, 2016