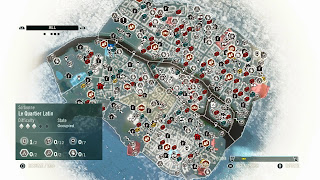 Ubisoft always use the same copy & paste formula with a map full of icons in the Assassin Creed & Far Cry games.

It's a formula that is beginning to tire & I ignored most of the icons to focus just on the main campaign. This time you are running around the Paris rooftops, the game has lost of all future sections from the previous game which is a shame.

There were obviously lots of issues with this game at launch, waiting six months meant the issues were all fixed & I experienced no problems during the game.

After completing the main campaign, I have started the Dead Kings DLC which was given away free by Ubisoft. I've also purchased Battlefield Hardline so will be playing that next.
Posted by Krazy Khan on May 28, 2015