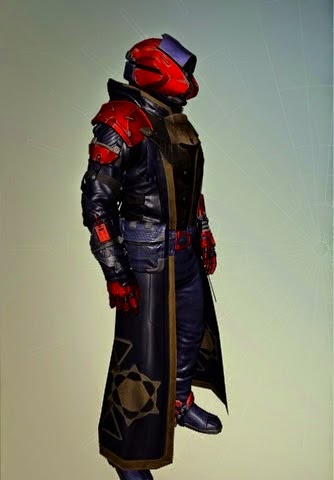 With Destiny there is the Elephant in the room about the grind in the game. It annoys some gamers who once they reach level 20 give up on the game. After level 20 you need to start focusing on equipping legendary or exotic armour to take up you light level.

Luckily for my warlock I had an exotic chest & legendary helmet in the vault (loot from my Titan character), once equipped these took me up to level 24. The grind for me then began to level up my vanguard rank so I could purchase armour from the trader. I always focus on completing vanguard bounties & when on patrol missions always keep a look out for VIP missions (these have a star in the icon). These reward you with more rep points than other patrol missions.

Once I increased my vanguard rank to level 2 I then switched to the Vanguard Strike mode to take part in Tiger Strikes to get vanguard marks. Once I had 70 odd marks I purchased gauntlets that reloaded auto rifles faster & cool down on grenades.

With the Warlock on 26 I now need to purchase some legendary boots to increase my light level. I'm still a bit undecided about which class I like voidwalker or sunsinger. I also need to decide on what exotic armour I want to use because the chest plate I have has some upgrades I won't use like fusion rifle ammo increase.

Weapons I've decided to stick with auto rifles I just don't get on with any other primary weapon. Xur once again did not have IceBreaker so I'll save strange coins for next week.

The grind does not become an issue when playing with friends online & I've had quite a few sessions completing daily missions & weekly heroic/nightfall strike during the week.

Target for next week is to continue upgrading Warlock & hopefully take part in a raid with my Titan character.
Posted by gospvg on November 23, 2014