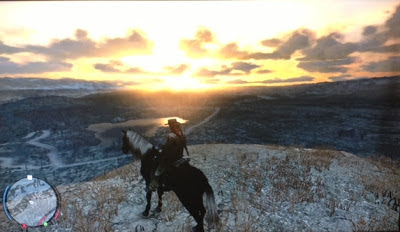 Aeris dying in Final Fantasy 7 was probably the greatest unexpected gaming event I've experienced. The sheer shock that a character you had developed over many hours was no more.

I thoroughly enjoyed playing John Marston but truth be told in could have been any character because it is the western setting that made the game. I'm a big fan of western movies and a chance to play that setting in a video game was an amazing experience. I only regret that it has taken me this long to finally getting round to play the game.

The scenery, the sunsets !! Oh my the sunsets, the duels, the swagger of cowboys with their no nonsense attitude. John Marston ticked all the western cowboy boxes.

With the story events unfolding the way they were it should have come as no surprise when the law decided to attack the family ranch. Edgar Ross wanted to finish off the last surviving member of Duke's gang. Having used John to do his dirty work he arrived with an army of soldiers to kill one man.

Surely John must have known something like this was likely to happen? Why not uproot & move to Mexico under the watchful eye of Reyes. But John is a stubborn character & stayed put at the ranch.

Edgar & the army promptly attacked the ranch killing Uncle in the process. John fearing for his son & wife sent them off on horseback to safety.

In an alternative ending I now would have John riding out of the barn being chased by the law all the way to Mexico where Reyes men who are patrolling the crossing come to his rescue to kill the soldiers. Then with another set of missions John sets out to finish off the loose ends by killing Edgar, Archer & all who wanted him dead.

But alas that was not the story of John Marston. Instead he walks out of the barn shooting & taking out as many soldiers & lawmen before he is gunned down to his death. John Marston is dead.

This was always going to be the way he would die. The blaze of glory achieved in a gunfight except this time there was no crowning moment. Jack & Abigail return to the ranch to find John lying in a pool of blood. The story then moves on to Jack Marston looking over his parents grave & his thirst for revenge begins.

What follows is a disappointment, Jack should have been given a new set of missions which takes him all over the map meeting all of John's acquaintances & informing them of the death of John. The men involved in the attack on John should have been scattered all over & Jack follows clues before a showdown.

Instead the game focuses on just Edgar Ross & you follow the clues to Mexico. Here you meet up with Edgar who is now retired & on a hunting holiday. You are then challenged to a duel & after Edgar is dead or in my case pumped full of lead that his body ends up floating down the river. The credits roll ...

No ending sequence or dialogue from Jack. Not even an epic monologue of John Marston to a wind rustling tune.

Maybe that is how it was in the Wild West the roar of a buffalo stampede followed by silence.
Posted by gospvg on July 24, 2013