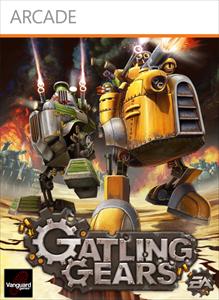 It was in limbo for a long time but I finally managed to get my son to sit down for an hour to complete the last few levels.

It's your usual twin stick shooter affair but with mechs, you have very basic custom add-ons in the form of different skins & the weapons can be upgraded by collecting enough gold through the levels.

At the end of each level you get to encounter a final boss which only proves tricky because of the re-spawning minions.