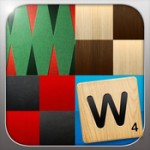 I have only one games folder on my iPhone & occassionally a game comes along that drives itself into the folder & that game was Ticket to Ride. Thus I had to get rid of one game & Friendle was my least played.

It is a nice app that offers you seven games you can play against friends but I only really ever played Backgammon. In fact before Friendle I did not know how to play the game of Backgammon so the game actually taught me something.

The list of games in the folder so far are Words with Friends, Disc Drivin, Hero Academy, Carcassonne, Outwitters, Pocket Heroes, Tiny Tower, Matching with Friends, Ticket to Ride, Bang, Song Pop & Trivie. The latter two have their days numbered.
Posted by gospvg on August 18, 2012