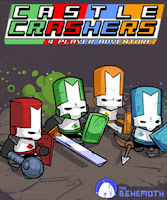 I purchased the game nearly two years ago & even though the kids have played & completed the game, I had yet to start. With 4 player on-line gameplay, the perfect PMG game.

Instantly the world map reminded me of Super Mario World on the SNES, giving you the option to replay stages quickly. With 4 players the game is very frantic at times & with on-line the occasional lag effect was noticed.

Because the kids had already played some of the characters were already quite levelled up thus I went with the red knight starting from level 1,

Everyone else had previously played the game at some point but for me a total noob you had the option to attack with your sword, long range attack arrow attack or use your magic skill. All of which took me a while to figure out the attack types.

The red knight has lightning magic but you need to let it charge for a few seconds before attacking. You get experience points during the game to level up your character & at level 5 I have not yet decided to focus on any particular skill so currently have an all-round red knight.

You also collect coins dropped by enemies which you can use to purchase new weapons or health potions. The weapons you can only purchase if your character is at the correct level to use the weapon so I decided it was best to just purchase health potions which when selected will auto-heal your character.

An enjoyable hour session with Gus, Jaimie & RLLMUK Jaimie (Smithstock). Now that I understand the game mechanics & what each button does the next session hopefully I can kill more enemies to gain more experience points to level up.