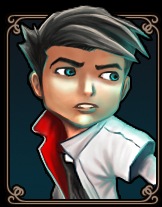 The character to your left is Tobias, this is the main character in the game. Call him your character but you can't rename him. His name is Tobias and it is set.

Good, now let me LOAD you the first training map .. AAARGH !!! Yes you can scream because for an XBLA game this game has more loading than a Acorn Electron tape game "Load Game"


When I first read the news that a new Vandal Hearts game was going to be released, I was very excited because having played the first two games on the Playstation I knew this would be a good turn-based strategy rpg. I almost never buy any XBLA games for 1200 points, I always wait for them to drop to 800 or lower in a weekly sale. But with Flames of Judegement I made an exception and purchased it a few weeks after release.

The game itself is your usual strategy RPG with melee, range & magic attack options. The usual treasure chests are on the maps for you to unlock. Along the way you can find secret maps which unlock battle maps for you to find rare items and level up your characters. If you love your strategy games it is all very familiar and enjoyable until you get to the last boss.


Here Konami decide to give you a challenge. I got truly annihilated and turned off the game in disgust.

It was not till a year later when my youngest son started to play the game I thought let's go back and tackle that last boss fight again. Eventually I managed it after careful planning & deduction of the elements involved.

There are two endings to the game but for the moment I am happy to leave this game completed with the one ending. It is an enjoyable turn-based strategy rpg but offers nothing new in terms of game-play it is the tried & tested formula which works nicely but I long for some innovation.
Posted by gospvg on September 13, 2011