Well the Lego Star Wars idea went out of the window, I got hooked into playing Deus Ex Mankind Divided. Took me a while to remember some of the mechanics especially hacking but I'm comfortable now & enjoying going around Prague completing various side missions.

You start the game with a lot of augmentations but after suffering a malfunction from an explosion you need to visit a doctor to reboot your system, this gives you the chance to be a bit more selective on what skills you want to unlock.

I've completed a few of the side quests in Prague but basically I've been walking around and dealing with the smaller quests given to you by various NPC's & exploring places either by hacking or sneaking around via air vents. It's a good game, I like it will keep me busy for the next few weeks.

Decided to take a look at the free to play games on the playstation store & downloaded Neverwinter & Hawken. My son is trying out Neverwinter, it seems to have a lot of content but suffers really badly from frame rate issues. Hawken on the other hand I like, it's mech v mech combat :) Star Trek Online has been added today will add that to the download queue to give it a try.

The next lot of playstation plus games have been added in the brilliant Journey, Lords of the Fallen & Badland. Not tried any of them yet but will do during the week.

Played a bit of Destiny last week and got a new exotic heavy rocket launcher Dragon's Breath which I can't use because my one exotic weapon is the Suros Regime Auto Rifle but I did also get the Armamentarium exotic chest plate which gives you two grenades so swapped that out for the Crest of Alpha Lupi. I used my 200 silver coins to use at the Eververse shop so purchased the rude taunt emote. 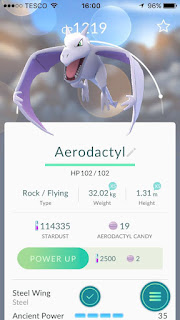 I finally managed to hatch a 10K egg which was in an incubator for a couple of weeks & was rewarded with an Aerodactyl. I really need to remember to keep the app open when I am walking around. Level 21 now & I need a whopping 75K XP to get to the next level, time to use those lucky eggs I think.

On Clash Royale I manged to unlock the Golem card but it uses 8 elixir before you can play it !! It's very tough and when destroyed splits into two smaller golems. Had a bad run of games & dropped back to 1800 trophies.

I'm still enjoying pootling around in No Man's Sky, finally found some underwater creatures, really wish the game would auto-charge the breathing equipment form the resources you have to save you going back into menus every few minutes.

Followed the atlas path which **spoilers** I won't talk about here best to watch the video below if you want to know.


I do need to get back to some Lego Star Wars but expect I'll be distracted by Deus Ex. Until next week keep gaming :)