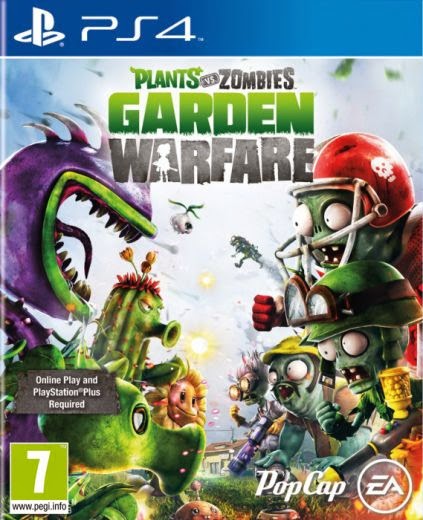 I'm bored of Borderlands so we decided to try Plants vs Zombies Garden Warfare on the PS4 instead.

The Garden Ops mode is a 4-player wave attack in which you choose one of four character types & shoot zombies.

I went with the peashooter class to try and do most damage. You start the stage by choosing a garden you want to defend from zombies. There are empty plant pots dotted around the level you can use these to plant a 'Plant' that will help you attack the zombies or heal your characters.

The first few waves are easy but at level 5 you will get a mini-boss wave and after this you get more difficult zombies on the later waves. The final wave 10 is very difficult and once you have defeated the bosses you have to reach a checkpoint to exit the stage whilst surviving a zombie onslaught.

Your character levels up by completing various challenges to unlock new skills & the coins you are awarded can be used to purchase sticker packs which give you plants you can use in the various modes or upgrades to your character class.

It makes a nice change from Borderlands.
Posted by Krazy Khan on February 19, 2015