New armour shader Thunder Devil now applied to my Titan which I received from completing a daily mission.

I had a good week playing Destiny, completing the weekly strike with Kamino on hardest difficulty to get 9 strange coins & I managed to unlock a few more through decrypting blue engrams.

An easier way to get more strange coins is obviously to have more than one character & complete the weekly mission on the hardest setting with each character but I don't have time to even think about starting a new character. 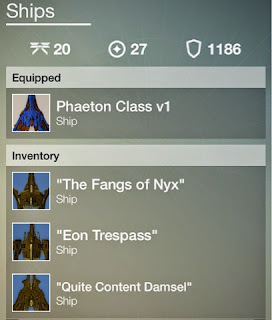 I also unlocked quite a few ship engrams from blue engram drops but I still like my Phaeton Class v1.

It's a shame Bungie have not introduced any ship gameplay in the game, I would have enjoyed playing a few missions or maybe even some strikes that involved using the ship.


At least the Sparrow Bikes you can use in the game, the ships are just eye candy for the loading screen. 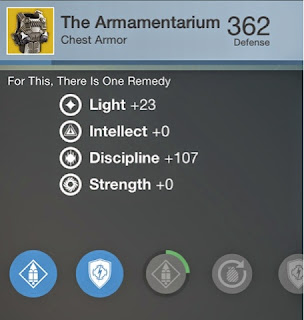 When Xur (Trader in Tower who only appears Friday to Sunday) arrived yesterday I first spent some mote of lights on the engram but it decrypted into warlock armour.

I was hoping I might have gotten lucky to get the Titan alpha lupi chest armour but Xur wanted me to spend my hard-earned coins so I purchased the Armamentarium for 13 coins.

Yesterday with Hakk & Kamino we attempted the heroic strike but soon realised we were way too under-levelled & gave up to try the vault of glass with Skim.

It took us a while to figure out what we had to do but we needed an extra two players and truthfully probably needed better weapons to really stand a chance of getting past the first stage.

During the week I  also got offered a exotic bounty & went for the Pulse Rifle Bad Juju. Thanks to the weekly strike I completed the first stage of the bounty. The second stage is to complete 25 strike missions, I'm currently on 3 so that will take me a while.

Borderlands arrived on Thursday but apart from entering some shift codes I've not started playing it yet. Last week I thought I would stop playing Destiny for Borderlands but I'm enjoying Destiny far too much at the moment to let it go.

Tasks for next week on Destiny are to level up my new chest armour & complete more strikes to complete 2nd stage of bounty. Also on Tuesday I'm teaming up with 5 other RLLMUK guys to attempt the vault of glass. Hopefully we can get past the first stage.

Fingers crossed that Xur has an Assault Rifle for sale next week.