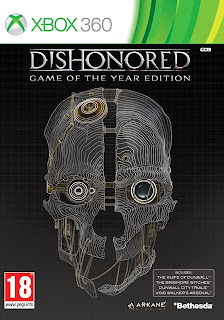 Got bored of playing GTAV online, so I played a few hours of Dishonored yesterday, I only really wanted to install the game but ended up getting sucked in, the mirrors edge style viewpoint takes a while to get familiar.

The stealth-based gameplay is very enjoyable but I keep wishing for a Splinter Cell style radar to show me where enemies are, I need to get better at hiding behind obstacles & peeking out to see where the enemies are? I could of course go charging in & attack but the stealth is so much more enjoyable.

In other news fourth time lucky for my PS4 pre-order with a Killzone bundle from Sainsbury’s on order, wobblegate is getting discussed quite a bit & the white light of death has been reported on a few consoles. Glad the US are getting their machines early so they can beta test the machine in case of any issues.
Posted by gospvg on November 14, 2013