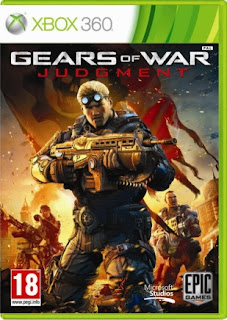 It's been a quiet couple of years for local co-op gaming. Gears 3 last year & Halo 4 earlier this year is all that was on the platter. It's a shame that 99.9 % of all local co-op games are shooters, after a while they begin to become a bore.

Which probably explains the long gaps in between each co-op game played.

No Marcus or Dom in this story it's all about Baird & Cole Train, along with two new recruits in Sofia & Paduk. The game is a prequel to the Gears Trilogy.

It starts with a typical military court marshall & gives the player a chance to visit each characters flashback of events.Not much has changed on the gameplay front apart from a few tweaks to throwing a grenade & quick swap of weapons.

Each mission also gives you a declassified challenge to accomplish for experience & braggin points. So cue the action.. Shoot, reload, collect ammo, shoot, chainsaw melee attack, throw grenade, reload, revive, shoot and I think you get the picture by now.

The only advantage local co-op offers you is the quick communication to your partner. "I'm down, revive me" "Tickers incoming!!" & the obvious gloating opportunity at the end with mission stats to see who got the most kills.

Some of the missions take a cue straight out of horde mode & have you defending a location from waves of enemies. After completing Baird's flashback we had enough adrenaline injected action for the day. Sofia's story will have to wait for another evening. I've got a pretty good idea of what to expect. It starts with shoot...
Posted by gospvg on July 29, 2013