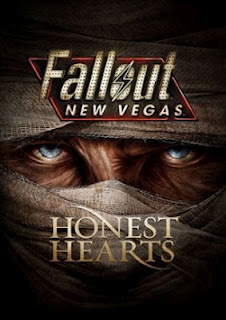 Another DLC completed, Honest Hearts has you joining the fight of the Sorrows & the Dead Horses against the White Legs.

The two tribes have a mutual understanding against each other but the Sorrows are generally a more peaceful tribe & the Dead Horses are happy to kill if needed.

By doing various quests you eventually end up at a crossroad where you have to decide if you want to help the Sorrows leave Zion or go and attack the White Legs so the tribes can live in peace.

This would be a good point to save the game if you want to see both endings. I won't say any further want happens in the game but I played both endings before leaving Zion & returning to the Mojave wasteland.

I am going to take a break before starting the next DLC to go & play Uncharted 2.