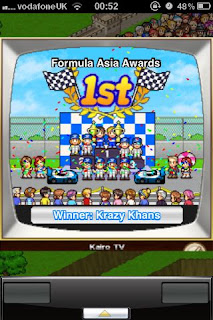 Another addictive game from Kairosoft (Game Dev Story) this time you take the role of running a racing team. Choose your drivers & mechanics & go racing around the globe on road circuits, off-road & even icy tracks.

Along the way you can research new car designs, parts & train your drivers or upgrade your mechanics. These all help you to develop a faster car so you can compete & win in the various races & grand prix's.

Winning races attracts sponsors to your team who reward you with various items from parts to research or money.

In the game you have a time of 14 years in which to compete after this you can carry on but your high score will not change or you can start a new game + & carry over 2 items from your first game to try again.

The drivers have similarities to real world F1 drivers like Kimi Kone or Ireton Cena. The Krazy Khans went on to rule the racing world with Ben Jutton & Lou Hampton.

There are only three grand prix's for you to compete in but you will need to play the game at least twice before you have a car good enough to with the third grand prix. For me this game is on the same enjoyment level as Game Dev Story because of my obvious love for Formula 1. Now to go back & finish off Sword & Poker 2.