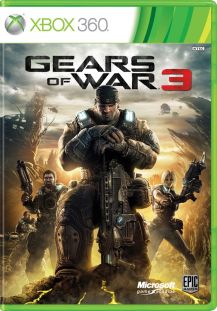 After the failure that was Halo Anniversary, it was good to return to the Gears of War series and enjoy a co-op game that works.

The story continues with Marcus & Dom on board the Sovereign (There is a nice recap video on the main menu which give you the story from the first two games) awaiting the arrival of Chairman Prescott the ship is attacked by the lambent. Prescott then lands and hands Marcus a disk before going off to see the Captain.

Marcus then finds out via the disk that his dad is still alive, at this point the ship comes under attack from a leviathan. This is your first boss sequence & also your first chance to control a silverback mech. Baird & Cole help kill the leviathan from the bridge above but the ship is destroyed.

You then get a flashback showing how Baird & Cole whilst searching for supplies visit the stadium where Cole used to play, they then receive the distress call from the Sovereign about the leviathan attack. Baird then comes up with the idea of throwing a crate full of tickers onto the leviathan which also destroys the ship.

The gameplay is the same tested formula from the previous games except this time instead of the locust you have the lambent attacking you. The action sequences are really top draw with huge monster boss fights & Hollywood style cut scenes.