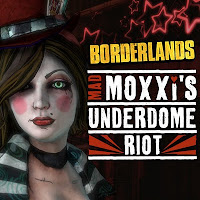 I created a new character and started a split screen game with my son playing co-op with his LVL 64 character. The new character doe not unlock fast travel but my son does with his character so we warped to Mad Moxxi.

I can then select the first quest on the small arena's & all the enemies were lvl4 touch for my new character but a walk in the park for my sons lvl64 character. After completing the first 3 arena's & turning in for the quest my character jumped to a lvl6 with the experience points gained. We then went onto Stage 4, the enemies were now a lvl 12, again too tough for me but very easy for my son.

I will be using this tactic for the UGVM weekly PMG to finish off stage 5 & 6. With 3 high levelled characters it stage 5 should hopefully take us a lot quicker than 3.5 hours we wasted on stage 4.

Update
Stage 5 took us just over 2 hours to complete.
Posted by gospvg on September 04, 2011