6th round – THE FINAL !! The best UGVM player vs The best BETEO player. After having played 6 games to get this far you have 1 more game to play. The winner takes with him the Player Championship but who will win the Team Championship with 5 points up for grabs to the winning team !! 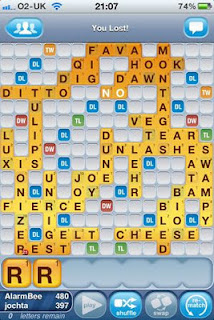 The final team scores are

Email ThisBlogThis!Share to TwitterShare to FacebookShare to Pinterest
Labels: iOS, Words With Friends