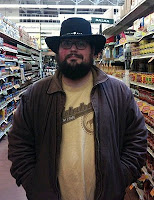 It would have been Owen's Birthday today, miss you big guy.

If you have not visited Inverty.com yet then this is what you are missing out on

A post from Owen on We Love Katamari on the PS2

I’m so sorry I missed our date today. I know, I know, but it’s been a strange diary, even by my standards. I was on my way to see you, trying to mind my own business, when a tiny Sumo wrestler approached me and asked for my help. Of course, he actually meant he wanted my father’s help. I’m nothing to these people – nothing! I do all the work, all the rolling, yet it’s my father who gets the praise, the fans, the glory. I don’t know how much longer I can stand it.

But my father forced me into helping him again. He made me roll this Sumo wrestler around the town picking up food that had been left lying around. I got hit by a train several times because chicken legs had been left on the railway line, but I’m okay. Just a bit sore. This guy ate and ate. He even ate some children I ran into by mistake. Oh God, darling, I’m a murderer! I don’t want to do this! I don’t want to live this life! I want to be good! I want to paint! Maybe teach! Not this endless rolling, rolling, rolling. I’m a thief and a killer!

My father had only given me five minutes to get this Sumo guy up to size and by that time I’d failed. Everything went black and my father appeared above me, terrifying to behold. And then the laser bolts shot from his eyes, something I’ve seen before. He was so mad at me! I ran, trying to evade his terrible discipline, but some of the bolts hit. It was burning agony like I’ve never felt. My poor raw hide! He hit just the spots left raw by the train hits. So I tried again and again I failed him and his rage was no less brutal.

And again I tried and this time I realised I had to take the Sumo wrestler to his match before the five minutes was up. He beat his opponent and my father was all sweetness and light and let me go. I ran all the way to the cinema, but by the time I got there, you’d gone. I’m really sorry.

I know we’ve talked about this, how I should run away, let one of cousins take over my duties, that the way my father treats me is wrong. But I can’t help going back. He’s my father, and he’s King of the Cosmos and I’d never be able to hide. I love you, but like it or not, this is my life. I hope you can accept that. I’ve learned to, in time I’m sure you will, too.

Maybe you should come round for dinner one day, so I can introduce you? Please, reply soon. I miss you.

Your Love,
The Prince