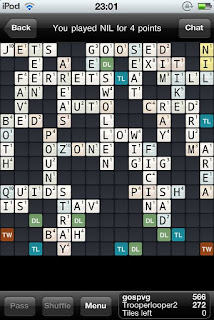 What another words game?
I still enjoy Words with Friends but a lot of users on BETEO who are Android users have been raving about Wordfeud. So when it was released to the Appstore I thought it's only fair to try it.

The first option you get on starting a new game is to play a standard board or random, I selected random this juggles the TW & others tiles around before you start the game.

After that it plays the same as any Scrabble type game.

On the iPod Touch it is a bit buggy at the moment it has crashed on me a few times but if you have the game send me a challenge.
Posted by gospvg on April 12, 2011