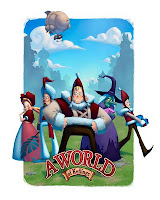 The sequel to Kingdom for Keflings brings with it co-op play. It's essentialy the same tried & tested gameplay. Get resources & build your blueprints to develop new buildings. You now have three kingdoms you can travel through Ice, Desert & Forest.

I have been playing for 5 hours with my daughter on local co-op, we have now completed the ice kingdom & are working on the forest kingdom. We lost a corrupted 7 hour gameplay save so had to reload an older save.

You can level up your characters by using eyeballs to increase your weight carrying or speed ability. We also have 4 mystery gifts but I am not sure what to do with these?
It's 800 MS points which made it an instant purchase, to be honest I think I would have purchased it at 1200 because we have been anticipating it's release but don't tell Microsoft.

We need to find the final gate piece (Reminds me of Stargate - great sci-fi TV) to be able to warp to the Desert Kingdom - Not sure how you get that maybe by completing a quest in the Forest Kingdom?

But before that we will need to replay the time that we have lost due to the corrupted save.
Posted by gospvg on December 26, 2010